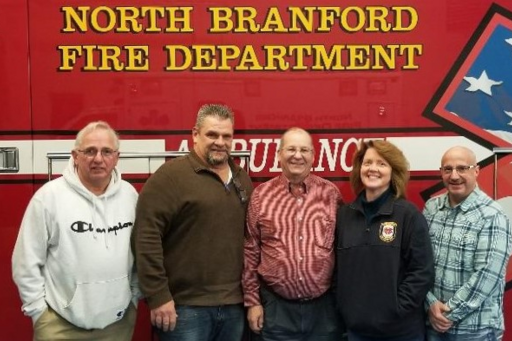 Ed Prunier has been on the Board for 7 years, served 3 years as Vice-Chairman and  Chairman to the board. Ed has been in the fire service for 37 years, Volunteered for 5 years, and career Firefighter for 31 years. Ed has been a North Branford resident for over 25 years.

Joe Civitello has been on the board for over 28 years in which he served as chairman for 11 years. As Chairman, Joe has passed many budgets, helped purchase 2 Engine Tankers, 1 Tanker, 5 New Rescues, 3 Ambulances, Many sets of gear and equipment.

Laura Burich has lived in North Branford for over 26 years and has been an EMT in North Branford for over 25 years. She was unanimously voted Captain of Company 4 and held that position until she stepped down in 2012. During her Tenure, she was responsible for day to day operations of the Ambulance Company. Laura has assisted numerous Emt instructors over the past 25 years as well as many refreshers. Laura is an America Heart Association  CPR Instructor and hods a certification as American Safety and Health Institute CPR Instructor and BLS Instructor.  Laura has worked in the Legal field for the last 30 years.

Andrew Campion is a retired career fire officer.  He is a 39-year veteran of the New Haven Fire Department.  During his tenure in New Haven, he worked as a firefighter, a company officer, and eventually as the department training officer.  He served in the NHFD as an Assistant Drillmaster and later Drillmaster for seventeen years. Commissioner Campion was also responsible for overhauling the fire communications center (ERS/911).  In late 2000, he worked with the New Haven Police Department to combine the police, fire and EMS dispatchers.  He is also the Past-President of the New Haven Firefighters IAFF Local 825.   Commissioner Campion currently works at Hart United as support counselor.  This position provides him with the opportunity to meet, know, and work with a number of individuals with developmental disabilities.  He has worked with some of these individuals from their teenage years to adulthood.  His goal has always been to help these individuals to succeed and to live independently within a community.

Gene Stabile Jr has lived in Northford for over 21 years. He was appointed to the Board of Fire Commission by the Town Council September 2017. Gene has been in the fire and ems service for over 35 years. He began in the fire service as a Cadet               (jr firefighter) with Northford Acres Company 3 at the age of 16 and went on to become a Firefighter/Paramedic with the New Haven Fire Department where he worked for 27 years, retiring as a Lieutenant in December 2010. Gene has been an active member with Northford Acres Company 3 for the past 11 years and was Captain for 6 years from 2011-2017. Gene serves as an EMT with Company 4, and is an AHA CPR and Adjunct EMS Instructor with Yale Center for EMS (Sponsor Hospital). Gene is also Certified State Fire Instructor along with many other CT certificates.